This article appeared in the August/September 2007 edition of Connections, Dublin Airport Authority's travel magazine. Neil Hayes was the commissioning editor.

Germany’s Reinheitsgebot law has for centuries protected the purity of the country’s famous beers and while Munich’s annual Oktoberfest is perhaps the best known celebration of German beer, it is in the smaller cities and regions of the country where some of Germany’s greatest beers are to be found. Rick LeVert takes a road trip with a difference.

An Aecht Schlenkerla Rauchbier sat ominously on the scrubbed wooden table in front of me. Befitting its name – smoke beer – it had a deep dark colour with hints of reddish brown when the light caught it just right. The head was snow white, the tightly packed bubbles fluffy and light. For many beer aficionados a Schlenkerla Rauchbier classifies as the holy grail of German beer culture, something to be quested for and something to be shown respect.

The Schlenkerla taproom is a maze of gothic arches located in the storied old town of Bamberg in Franconia, Lower Bavaria. Some people come to Bamberg because it’s one of Europe’s best-preserved medieval towns. They come to marvel at the cathedrals and cloisters, to wander in reverie through the twisting network of ancient streets and bridges. Others, like me, come because it has more breweries and produces more types of beer than any other town in Germany. Bamberg is Mecca in the religion of beer.

Bucking up my nerve to give the Rauchbier a go, I watched the matronly, gruff mannered waitresses lugging huge plates of pigs’ knuckles and dumplings through the crowded cavernous rooms. With a lingering hint of sauerkraut still wafting by from somewhere, I leapt into the abyss and was greeted by the most intensely flavoured beer I’d ever encountered. I can only describe it as a mouthful of liquid smoked bacon.

I suspect drinking something as challenging as Rauchbier needs to be learned just like the drinking of a good, complex whiskey. Whether spirits, wine or beer, the palate needs educating and training. Mine clearly wasn’t there – too many youthful years spent drinking Rolling Rock, Bud and Corona. I kept working the Rauchbier, inventorying the flavours, determined to find a point of access, and hoping yet for salvation.

Just five days earlier I’d been drinking beer in Dortmund with Gerd Rumann, the resident beer expert at Hövel’s Hausbräuerei, the only pub in Dortmund that still brews its own beer on the premises. Sixtyish with white hair and beard, a laconic sense of humour and an irreverent wit, Gerd placed my condition in the German context, calling it the ‘Warsteinerisation’ of the taste. He said it comes from the consolidation of the industry, the dominance of inferior brands, the loss of speciality brews and the overall degradation of beer culture. Take Dortmund as an example, a city built on steel, coal, beer and football. Of the nearly 60 breweries operating here in 1900 only one remains, the Dortmund Actien Bräuerie.

“When I was growing up in nearby Bochum.” Gerd told me, “we still had about 15 different breweries in the area but even they basically all produced the same type of beer – a pilsner. I didn’t discover beer diversity until I travelled to Belgium as a young man. I went into a pub there and ordered a beer, like at home. The waitress just looked at me dumbfounded. Finally she said, ‘Well, which one, we have 28 types’. Not brands mind you, types. That was an awakening; I spent the next two weeks working my way through every single one, educating my palate. I haven’t stopped since.”

Sitting at a long wooden table in one of Hövel’s simply adorned panelled rooms, I explained my plan to Gerd over several of the house Maibocks – a strong, seasonally brewed, amber beer. The education in beer that he spent two weeks in a Belgian pub acquiring, I wanted to achieve in a five-day train journey through the landscape of German beer. It could be done, he thought, there were still some spectacular beers out there, but you’ll want to know where to go and you’ll need to strictly follow the credo, think globally, drink locally.

He took me through the nuances of malting temperatures, told me about the differences between top and bottom fermenting yeasts, explained the impacts of filtering and the virtues of non filtering, He spoke highly of the Bavarian’s ability to make excellent beer even if he had a quibble with their take on the ‘Reinheitsgebot’. “If they could read”, he said whimsically, “they would see that the purity law of 1516 calls for beer to be made from water, barley malt, and hops, that’s it. Why they think that they brew Weissbier – which we all know is made from wheat malt – according to the Reinheitsgebot, I’ll never know.” Then he came to Bamberg. “That is the El Dorado of beer. Be careful, it’s not a place for beginners. And watch out for the Rauchbier – meaty stuff that.” With this, Gerd pointed me in the direction of my hotel. Notebook in hand I wandered merrily through the streets of Dortmund looking for my bed, ready for the quest to begin, tomorrow.

On the train next morning my fuzzy head and I watched the industrial heritage of the Ruhr roll by the window – Bochum, Duisburg, Hamm. It was the beginning of a rhythm that would shape my journey, the rhythm of the beer trip. Mornings I’d join the commuters, schoolchildren and travellers in the bustling stew of continental train stations. The first part of the day I’d spend watching the terrain pass by, seeing how the Ruhr gives way to the mythical Rhine, how the vineyards of Rhineland-Palatinate turn into the fairytale hills and houses of the Black Forest. I played tag with the Swiss border, skirted Lake Constance, crossed the agricultural plains of Lower Bavaria, and climbed into the foothills of the Alps. I saw endless fields of hops growing near Ingolstadt, and I got to know the geography to match the beer I’d drink in the evenings.

Directly across from Cologne’s magnificent Gothic cathedral sits Früh am Dom, a warren of archways and rooms, nooks and crannies, and a veritable cathedral of the world’s only beer ‘appellation’. The Kölsch Convention of 1985 stipulates that only certain brewers within the immediate vicinity of Cologne may brew this pale, top-fermented, fresh and fruity beer. Appellation or not, Kölsch has a cult status in this town that holds all ‘Kölner’ in its grip. Young, old, hip, frumpy, wealthy or working class, they gather in the pubs, the clubs, the trendy nightspots and homey restaurants to celebrate the communal bond of Kolsch. Come February and Karneval, their normal fervour turns to fever pitch when the Kölner literally drink themselves into a benumbed state of Kölsch-induced idiocy.

Gerd had warned me of the ‘Kölsch factor’, especially its part in the ancient rivalry between Cologne and neighbouring Düsseldorf, but I didn’t quite believe it until a ‘Kölner’ at my table in Früh am Dom let me in on a little secret. ‘’When everything here closes at midnight,’’ he said somewhat conspiratorially, “we all go down to the Rhine for a pee. All the Kölsch we’ve been drinking then flows down the river in the direction of Dusseldorf where they use it to make their ‘Altbier’.” No doubt the Düsseldorfer have another take on this little ditty, but I was pretty sure no one here in Cologne was going to enlighten me.

From my vantage point near the taproom in Früh am Dom I was ideally situated to observe the age-old spectacle of Kölsch. The blue-apron-wearing ‘Köbes’ – Cologne’s specialist breed of sharp-tongued, no-nonsense waiter – barked out orders to one of their brethren who stood next to an elevated, hundred-litre wooden barrel, filling a continuous line of ‘Stangen’, the trademarked cylindrical glasses of Kölsch, from the wide-open, gravity-fed spigot. One after the other, each waiter deftly unloaded the empties from his ‘Kranz’ – the aluminium tray purpose-built for carrying Stangen – reloaded with freshly tapped ones and set off, the Kranz swinging in front of him like an incense burner at a funeral mass. My waiter came by, smoothly dropped another Kölsch in front of me and, with a desultory flick of the wrist, added one more pencil line to the three already there. Unless you’re born in Cologne, chances are you’ll never truly understand the secret society for which Kölsch is the handshake. But that doesn’t matter. As they say in these parts, the stuff goes down like oil – smoothly.

“To succeed in Bavarian politics,” Michael Rapp, the mayor of Murnau, told me, “it helps if you can hold your beer.” I took this as a bit of an understatement in an area that would easily top the European list for highest per-capita consumption of beer if the stats were still collated on a regional rather than national basis. The Bavarians may no longer drink the 250 litres per year for every man, woman and child that they customarily downed in the 19th century, but public life here still revolves around the beer gardens, beer halls and events like Fasching and Fastnacht, where politicians meet their constituents and beer flows in copious amounts. “I have functions most days of the week,” said the mayor, “and beer is never far away.”

A picturesque town nestled in the foothills of the Alps, Murnau is also home to some of Bavaria’s best beers. The mayor and I were part of a table of happy souls in the Griesbräu, a beautifully renovated, traditional brewpub, where we gradually worked our way through the complete array of handcrafted beers on offer. We started light and went dark, moving from ‘helles’ to ‘Weissbier’ to ‘dunkles’ and finishing with the Drachenblut (dragon’s blood), a seasonal beer with light smoky flavour and fiery red colour.

Well into the evening the mayor confided that he, like most Bavarians, was a devotee of Weissbier. “We don’t think of it as a hot weather drink,” he told me. “Anytime of year and weather, that is our beer.” Having earlier in the day visited another Murnau beer institution – the family-run, Karg  Weissbier Bräuerei – I sensed a chance to topple the Murnau political elite and asked the mayor which Weissbier he preferred, Griesbräu or Karg? He gave me a little smile that indicated I must have had too much to drink if I thought he’d take that bait. He was right – to succeed in Bavarian politics it helps if you can hold your beer.

My night in Murnau with the mayor had been the final warm-up, the perfect training session before hitting the thicket of traditional brewpubs that dot the streets of Bamberg. I felt fit and hit them running. Right out of the blocks I tasted two of the finest beers I’ve ever had, the Herren Pils in Keesmann Bräu and the helles in Marsbräu. Then came the nutty-flavoured Zwergla in Bräuerei Fässla and the malty Schwärzla in the Klosterbräu. I then ran head-on into the wall of a Schlenkerla Rauchbier. Educated palate or not, I finally decided to head back to Mahrsbräu and console myself with an ‘ungespündetes’, known here simplu as a ‘U’. Now that’s a beer. 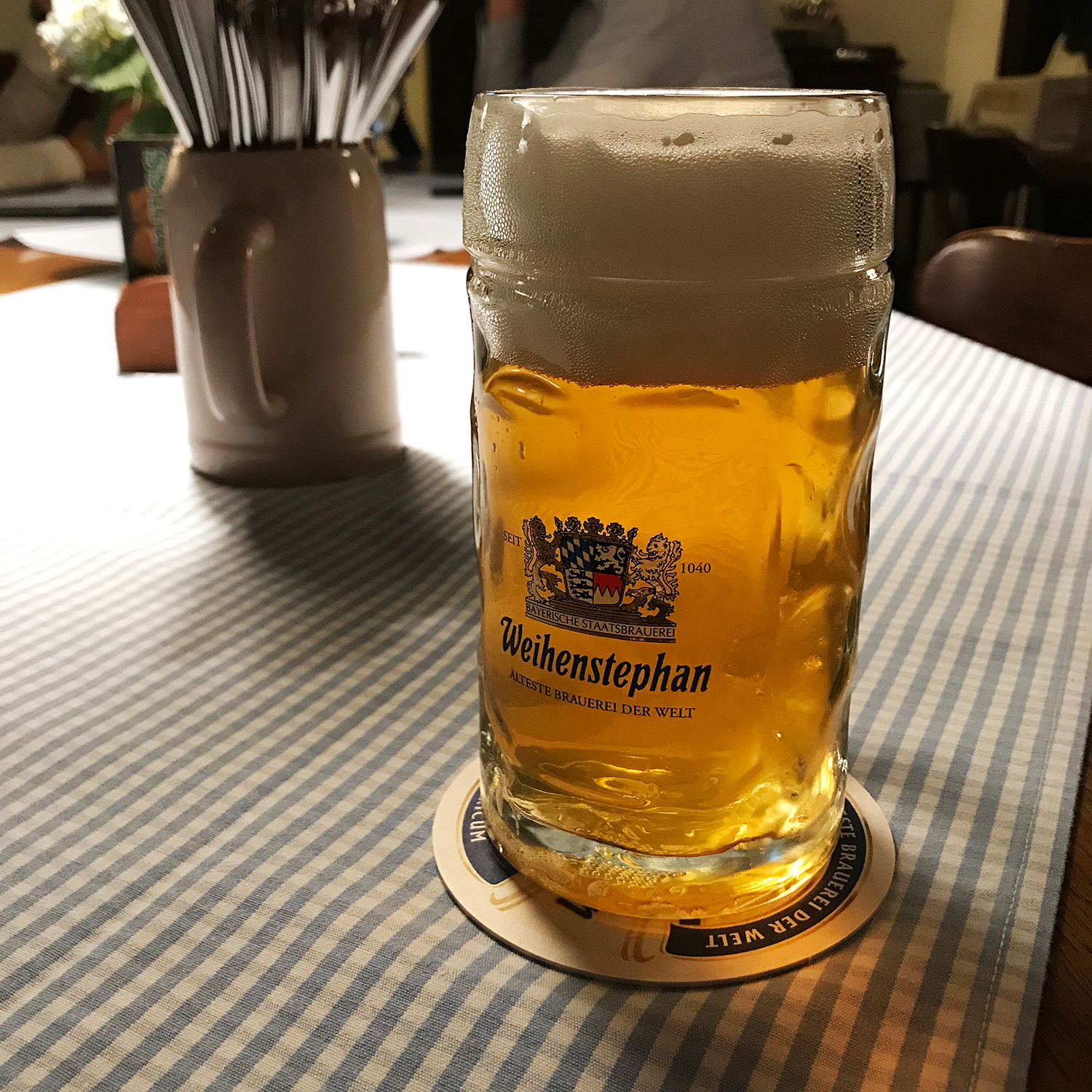 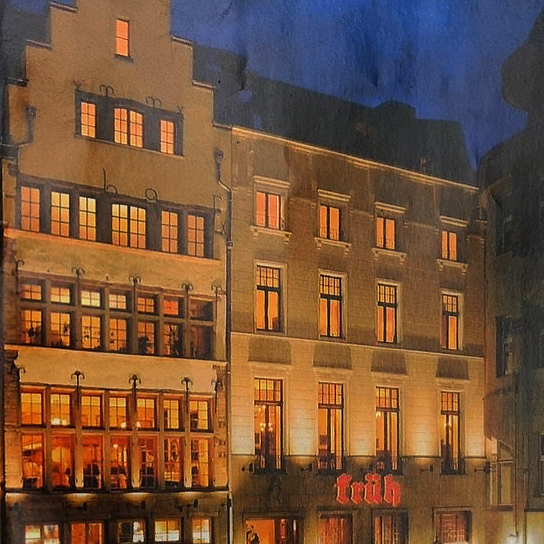 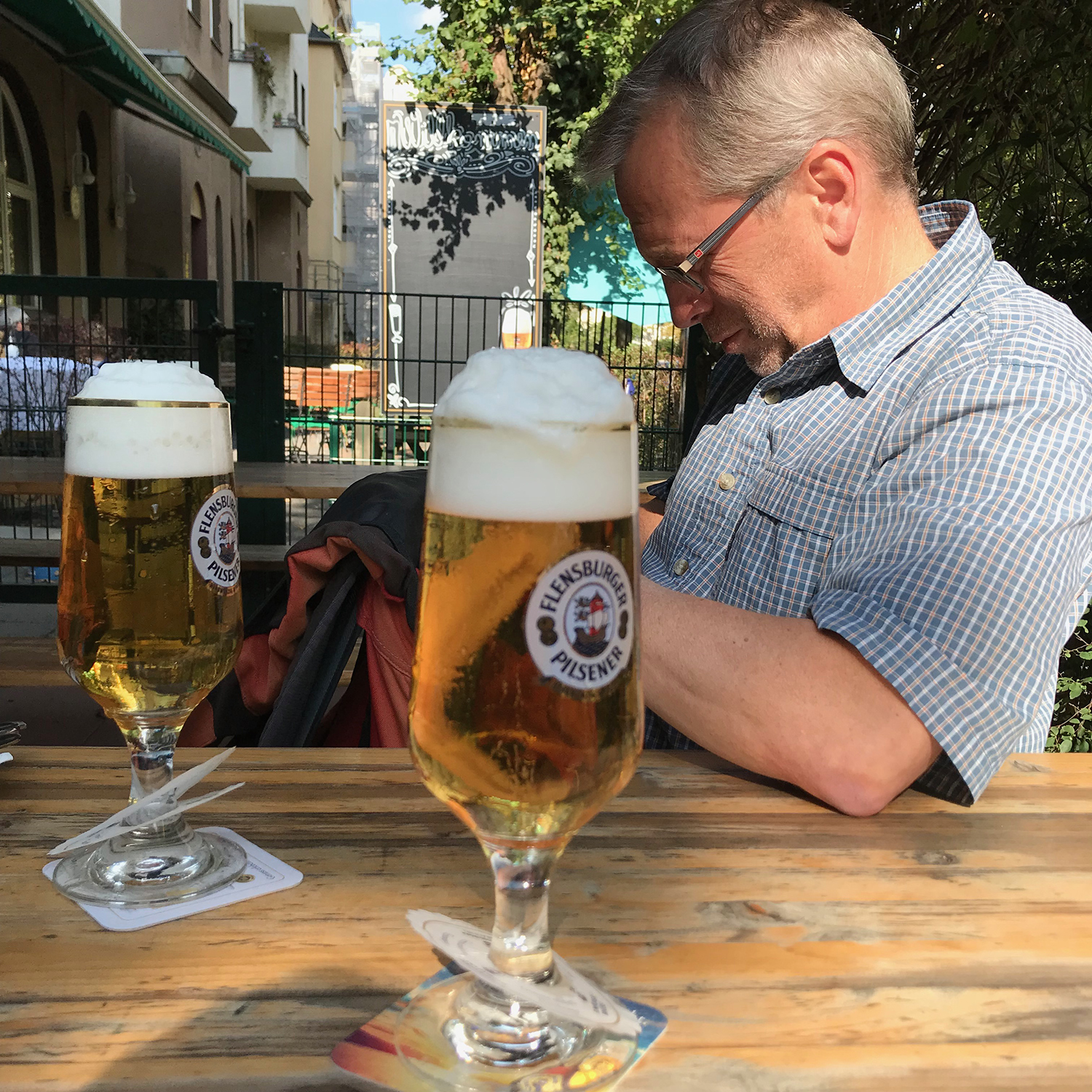 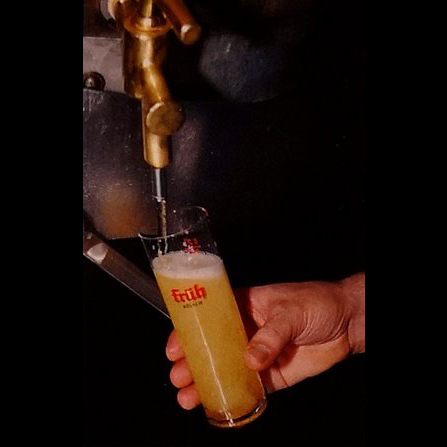 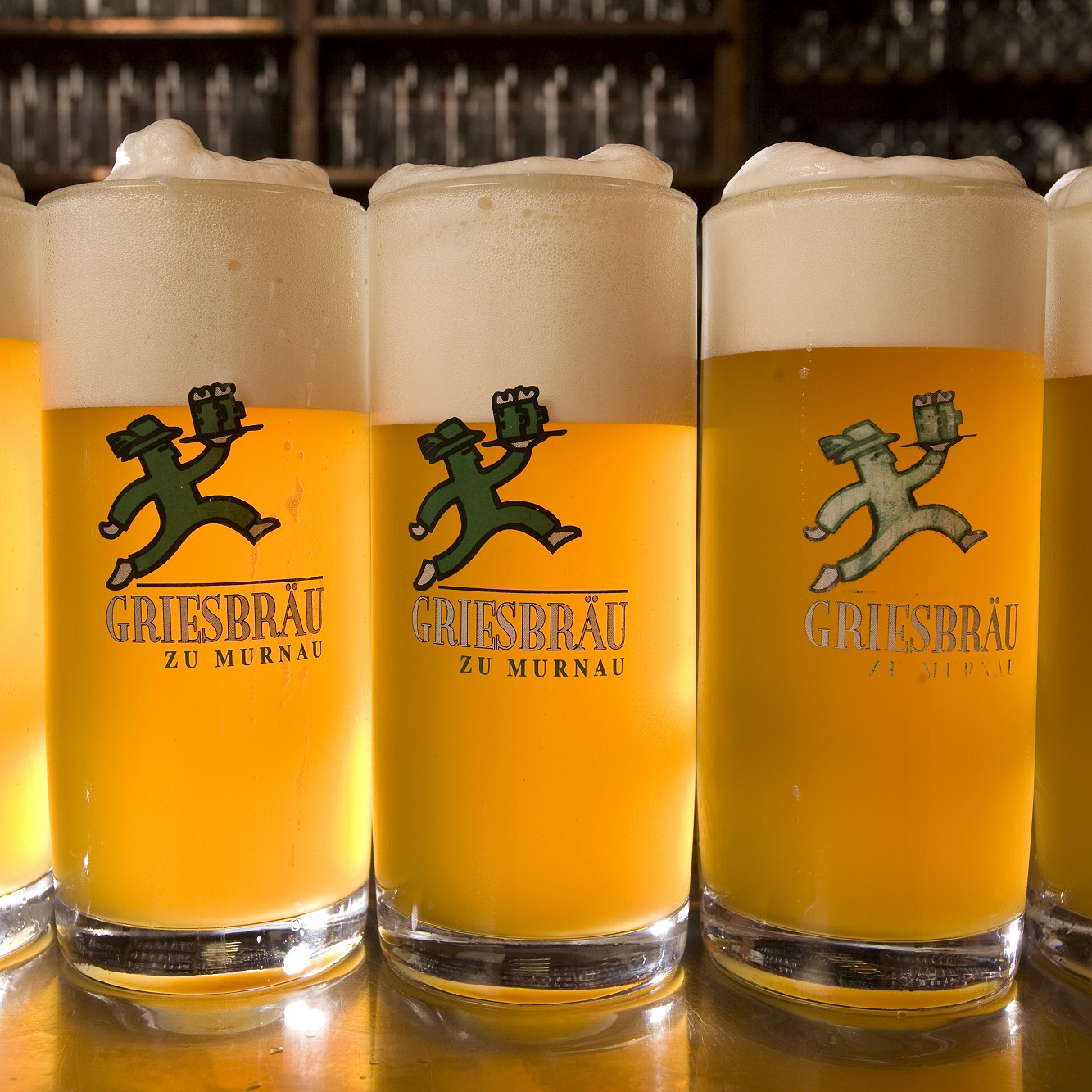 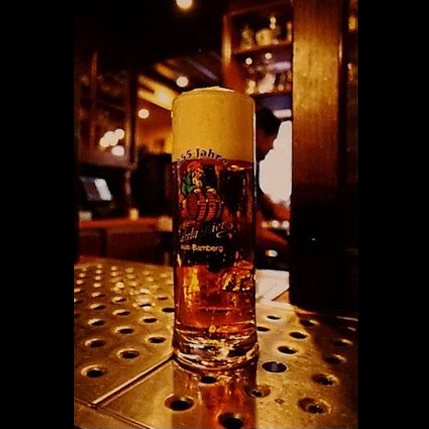 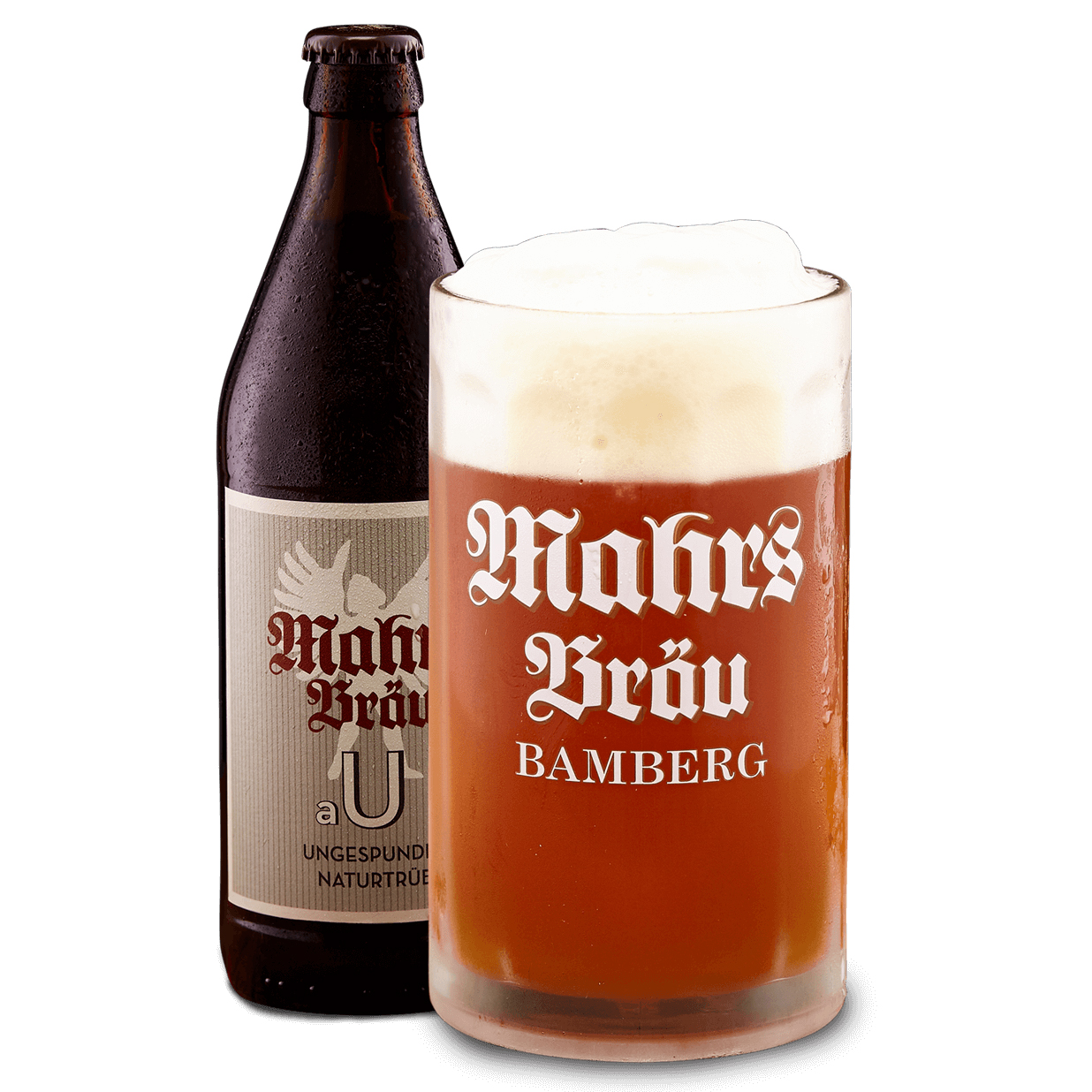 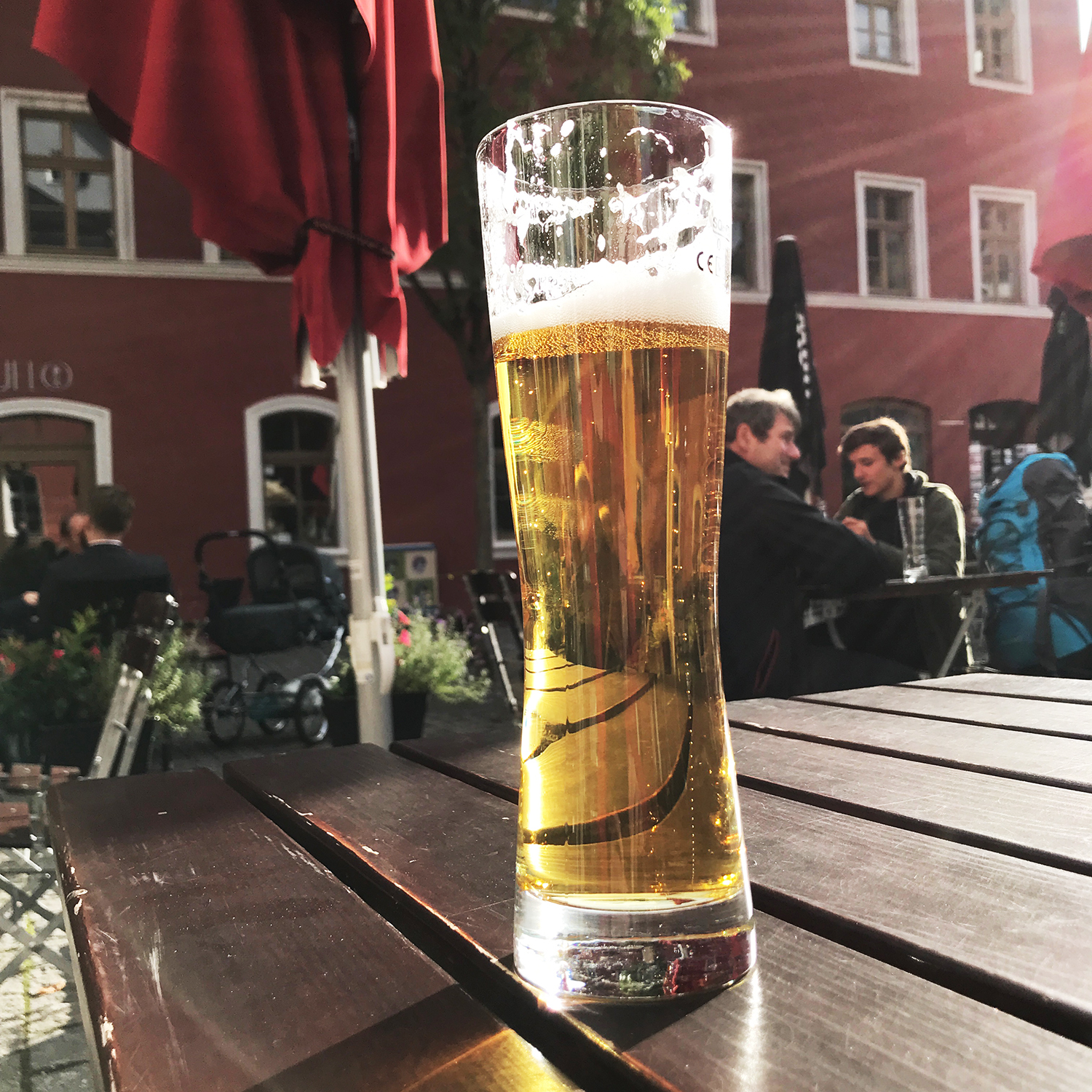